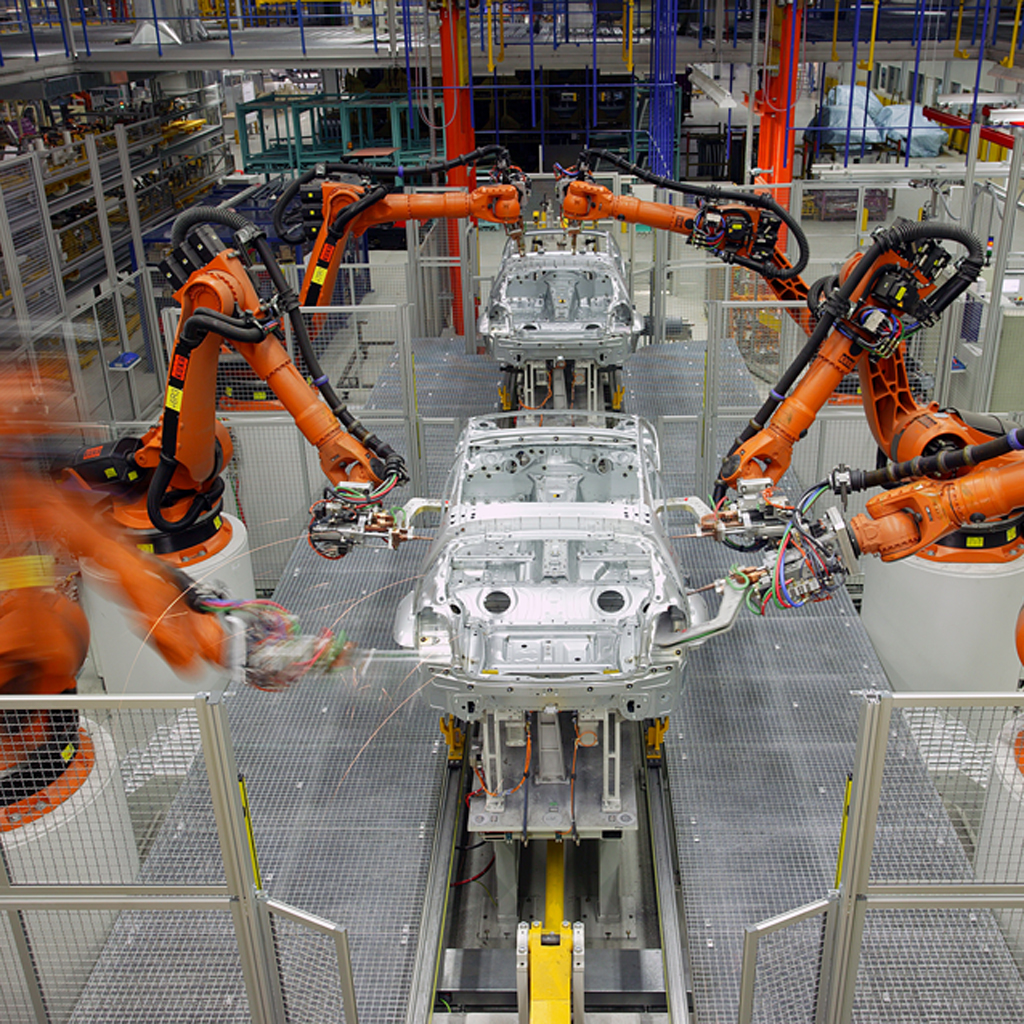 In February 2020 we penned an update letter surveying what we knew about the virus then called 2019-nCov. At that precarious time, we realized we were already in the midst of a truly global pandemic and wondered what the response would be. We did not foresee the scale of the devastation—the toll in lives lost and social upheaval. We did fret about supply chains through Asia becoming snarled, and, perhaps presciently, wrote “We worry about hysteresis, the longer-term effects that stubbornly persist after their initial causes disappear.”

Ultimately, when we look back at February 2020, we recall the feeling of staring out over the abyss. Forecasts were “futile,” we argued, because nature—and the whims of markets—will find a way to disrupt even the most securely laid plans. And yet, our outlook had we been forced to profess one, was for a deep economic slump and asset prices to retrace many months of gains as chastened market participants embedded higher risk premiums and more radical uncertainty in their portfolio.

That is exactly what happened… for two months. The Covid recession was officially the briefest in history, as monetary and fiscal policymakers shortly rode to the rescue, providing a floor under all sorts of financial markets and depositing more than $4 trillion in the bank accounts of American individuals and employers alone. Financial markets recovered with palpable giddiness—and then just kept rising. Despite record profits in 2021, the S&P 500—just one, but perhaps the most effervescently priced major index—trades today at over 21 times next year’s earnings. IPOs and less orthodox public listings swelled. Flush with sudden liquidity, the venture capital industry (which had been bunkering for winter since the implosion of WeWork, Masayoshi Son’s profitless and profligate office-rental-cum-consciousness-elevation boondoggle) is freshly rolling in riches and fawning press. Retail traders formed online flash-mobs and pushed the prices of parody currencies and bankrupt businesses into large capitalization territory.

Less than two years after a major party presidential candidate declared that automation would put most Americans out of work, a combination of replenished savings, office ties loosened after months of work-from-home, and justified risk-reward calculations about workplace face-to-face interaction has driven a so-called “Great Resignation.” Far from being automated out of existence, workers are voluntarily stepping away to reevaluate and revalue, while wages (particularly at the lower end) are responding briskly. Employers tell surveys at record rates that finding qualified workers is their greatest challenge. Contrary to the Fed’s expectation when it pledged to keep policy accommodative to ensure a “robust job market,” the obstacle to full employment has lately been labor supply, not demand. 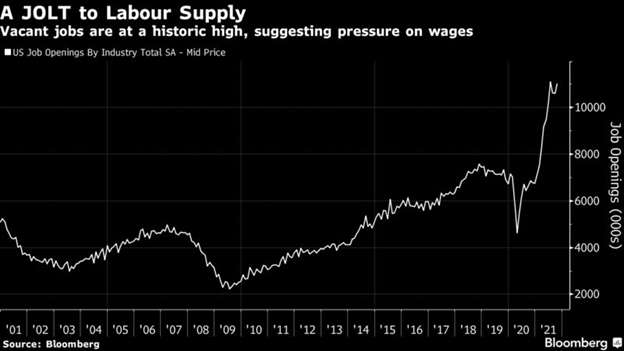 In our view, the market has learned all the wrong lessons from the pandemic. The new “Fed put” has been assumed (including by many on Wall Street with no pre-2008 institutional memory) to be permanent, irrevocable, and ironclad. Yet political conditions are changing; the Fed is now signaling they are willing to remove emergency measures in the face of soaring inflation. The market may have to unlearn many of the conclusions unquestioned since the start of the pandemic—foremost that one should always, without reservation, “buy the dip.” Unprecedented policy measures designed to save lives and incomes also encouraged an orgy of spending on consumer goods, 40-year highs in inflation, and debauched levels of speculation on any financialized asset able to bottle the zeitgeist of the moment. With “stonks,” SPACs, and some parts of the cryptoconomy off more than 50% from their highs, an understanding may be gradually seeping in. Peak liquidity and peak growth imply higher variability of future outcomes and higher dispersion of asset returns. 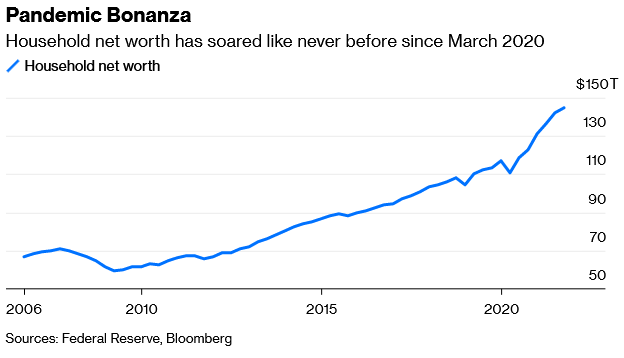 In the coming year, as one major bank puts it, the “training wheels” will have to come off. The Fed will taper asset purchases, and may raise benchmark rates, pushing markets increasingly to stand on their own. We liken this phase of the cycle to an unruly adolescent with great promise, some very good marks, its share of growing pains, and more than one brush with trouble carefully papered over by an unconditional parental backstop. As some point this rambunctious teenager will need to fly the nest—global central bank liquidity is slowing or in decline, wartime levels of fiscal support won’t be repeated, and at least one of three pillars supporting stock markets (record revenues, peak margins, and peak valuations) will likely have to give. A flattening yield curve suggests greater difficulty ahead. So, where will markets land when left on their own?

Given our disdain for forecasts, we can hardly claim to foresee losses where Wall Street strategists predict gains. But dangers are heightened. Economic conditions appear to be facing increasing headwinds and crosswinds, despite strong momentum that should last through most of 2022. Expectations in both equity and credit markets are dialed to the most optimistic end of their historical ranges. The amount of money fleeing seemingly surefire negative real returns in fixed income into private markets has been likened to a deluge. With the idea of purely “transitory” inflation banished to the dustbin of history, a hawkish central bank pivot may be in the offing. Markets are not currently priced for such a new reality. As liquidity is withdrawn, financial conditions tighten, firms who borrowed heavily face debt rollover difficulties, and long-duration (e.g. interest rate-sensitive) stocks that have experienced massive recent buying pressure may cool considerably.

It may be that capital investments inaugurated by ongoing labor shortages, communications technologies baptized in the pandemic work-from-home (WFH) environment, and a centralized infrastructure push from governments will result in a sustained pickup of economic productivity. But this will likely take years. In the meantime, we ask if the economic value added by the resurgent corporate sector (in the face of a rising labor share) is commensurate with all of the cash being thrown at it. If not—and we believe it is not, at least over short horizons—valuations will be inflated and prospective returns will fall. Those are the ingredients for a more defensive posture in portfolios, emphasizing assets more resilient to the greater bouts of volatility ahead.

How to invest in this environment? More than ever, our advice is to be sensible. Be diversified. Profitable small-cap stocks in the U.S. trade at mid-teens multiples, several turns below their large-cap peers. International developed markets (with European GDP growth looking perkier than it has in decades) are also relatively cheap. Emerging markets have been challenged on many sides but remain modestly valued. For stocks, “value” and “growth” are increasingly blurry categories, but in a market with rampant price pressures and many macro uncertainties, “quality”—sustainably high profits, pricing power and low debt—seems worth a reasonable premium. 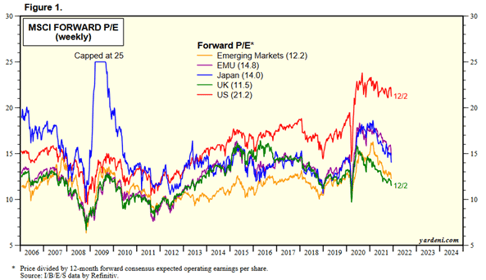 Don’t rush headlong into manias. SPACs and metaverses and blockchains may warrant investigation, but chasing momentum is always a shorter road to ruin than to riches. Be selective; think long-term (decades) and stick with that discipline. Notwithstanding prophetic claims from techno-futurists that we are living in the midst of precipitous structural economic change, patient long-termism remains the one asset that is truly scarce, a renewable source of an investment edge—what Warren Buffett suggests might be called “time horizon arbitrage.” You need not be smarter or faster if you are patient and more disciplined.

Amusingly, many of the loudest proponents of disruptive change are also among the most egregious short-term trend chasers. Unfortunately, they often assume the role of pied pipers for a generation new to investing—to their followers’ great disadvantage. A fundamental truth has been obscured during the almost two years of pandemic-inspired economic Twilight Zone: investing is hard. Especially for a younger generation saddled with student debt, priced out of housing markets, facing historically expensive equities and bonds, witness to multiple financial crises followed by multiple bailouts of the rentier class—their parents. No wonder they seek alternative ways to get rich quick—creating social media-friendly non-fungible tokens (NFTs), chasing meme stocks on Robinhood, resigning from their dead-end jobs in historic numbers. It’s said the collapse of the dot-com bubble crash launched a million startups (Google was a young company then). Maybe the pandemic will spawn a cohort of millions of metaverse-native influencers? Their mood and that of the markets will increasingly come to overlap. 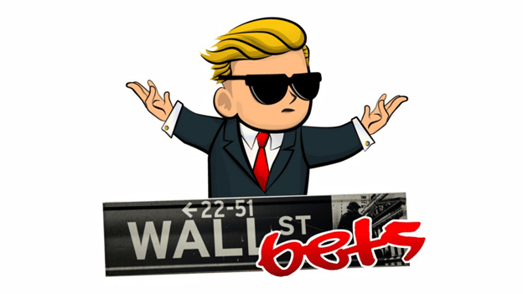 Older investors can ill afford to ignore this generation and the long-term sentiment shifts inspired by COVID, its coming-of-age moment. They will inherit vast sums from their parents, and they will care a great deal more about climate and about social justice, while trusting far less in institutions such as the Federal Reserve, Wall Street banks, and financial advisors than had previous generations. The surge in interest around Environmental, Social and Corporate Governance (ESG) investing, seen in the rise and fall of electric vehicle stock valuations, may reflect not simply a fad, but an early warning shot. For those building long-term portfolios, patience and an open mind are virtues (to repeat our earlier counsel concerning cryptocurrencies).

We conclude with some quick notes about what we’re watching in 2022.

WMS Partners Recognized by Barron's as a Top RIA Firm 2021

WMS Partners is pleased to announce that Barron's magazine has recognized WMS as one of the Top 100...

Over the past two years, the pandemic has caused distorted perceptions of time for many of us, as...