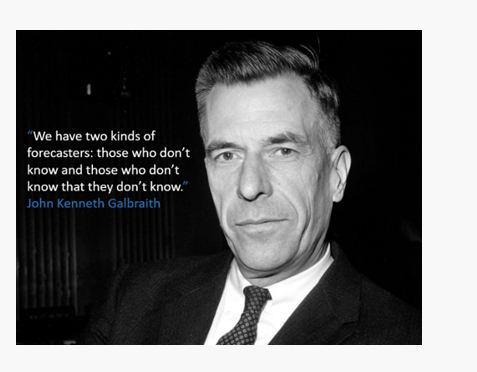 The Hazards of Forecasting

As the New Year turned over, before we had even gotten around to hanging our “Baby Yoda” wall calendars, we were inundated with Wall Street strategists’ outlooks for 2020. The cumulative effect of so many competing forecasts is like a noisy bar: too many voices shouting to carry on a coherent conversation. What actual investment significance does the new calendar year have anyway? Apart from tax considerations, is early January necessarily a better time to make an investment forecast than March, or August?

Moreover, these outlooks, forecasts, and projections are usually obsolete by the time the ink is dry. Barely six weeks into 2020, anything written before January is now irrelevant. Who remembers the assassination of a top Iranian general by a U.S. drone strike? Crude oil traders briefly worried about the closing of the geo-strategically vital Strait of Hormuz, and Twitter users caused “#WWIII” to top the trending list for about 24 hours.

Now we are facing a different apocalyptic scenario, one that didn’t appear in any of the economic outlooks we piled up at the start of the year. The 2019-nCoV (coronavirus) threatens a worldwide pandemic that could devastate the global transportation and lodging industries, as well as consumer sentiment generally. Perhaps more worrying for the economic outlook than the disease itself has been the massive public health response: Chinese authorities effectively cordoned off a province of 60 million people—a manufacturing and logistics hub whose epicenter, Wuhan, has been called “the Chicago of China”. It’s hard to imagine the scale of long-term damage to the global economy from the destruction of just-in-time supply chains and the prolonged shutdown of business activity in the Chinese heartland.

The suddenness of these turns of events serves mainly to highlight the futility of forecasts. A lesson we draw from such episodes can be summarized by the late economist John Kenneth Galbraith’s wisecrack: There are “two kinds of forecasters: those who don’t know, and those who don’t know they don’t know.” Our effort is to stay firmly in the first camp. The larger point about financial markets is that while news events cause short-term gyrations, economics is what moves asset prices over any horizon that a prudent investor cares about. Rather than becoming caught up in the market reaction to headlines about infection rates, death counts, or even earnings misses, at WMS Partners, we look to fundamental economic data for clues about future portfolio performance. At the time of writing, these data are not yet in.

Economists tend to remain anchored to trends;  Morgan Stanley predicts that growth in China for the first quarter will fall to 3.5%. This is laughably optimistic. Slowing growth after all still implies positive growth. Do data watchers truly believe there will be more economic activity in China this quarter than a year ago? Looking forward, traders have largely shrugged off the economic risk as transitory. This remains to be seen. The popular comparison to the SARS outbreak already looks tenuous as the number of infections and deaths from the current virus has rapidly outpaced the 2003 vintage. The Chinese economy in 2003 (in constant dollars) was 27% of its 2018 size, and its integration into the global trading system (tariff spats notwithstanding) is incomparably greater today. China in 2003 was 4.3% of global GDP. Today the number is 19.3%. Markets sputtered in 2003 but recovered quickly outbreak died out. Until last Friday, stock markets had heavily discounted what was perceived as a temporary disruption. Despite Apple’s warning for Q2 earnings, the S&P 500 was still making all-time highs in February. The MSCI All-Country World Index also snapped back from a late January slide and broke new records.

But as stock markets are starting to realize, there are serious reasons for concern. Foremost, many epidemiologists have warned that, absent a vaccine, the virus may become a widespread fact of life in every country like a much deadlier seasonal flu. Business travel and tourism could enter a sustained recession. Even if warmer weather stabilizes the disease’s spread, a global economy that was widely forecast to grow at 3.5% in 2020 may well undershoot expectations. With a continued backdrop of disinflationary trends, an ongoing deglobalization of international trading networks, and a fragile industrial recovery around the world, hitting stall speed becomes a relevant worry.

European manufacturing, which depends critically on China as both end market and supplier, was already in a parlous state entering 2020. Calls for a renaissance of French and German PMIs now look premature. Conferences are being canceled, and factory orders postponed. We worry about hysteresis, the longer-term effects that stubbornly persist after their initial causes disappear. So long as optimism around easy policy and a global synchronous trade and manufacturing revival holds, spending should remain resilient. But fear, like viruses, is contagious.

The longer cities are officially or effectively quarantined, the longer factories stay shut, the longer people stay home from work, the more permanent the damage to business and consumer confidence, the more supply chains are re-routed at great cost, and the more bankruptcies become inevitable. The hope lies in government stimulus, both from the Chinese and other countries' monetary authorities. No one doubts the zeal of economic first responders, but there are valid questions about their ability to calibrate the stimulus. Just last year the U.S. Federal Reserve was committed to a gradual unwinding of its swollen balance sheet. $421 billion net purchases of repos and Treasury bills later, the Fed has tacitly admitted that the money market is not yet ready to come off life support.

The U.S. 30-year bond yield, as good a benchmark we have for the expected long-run vibrancy of American economy, hit its all-time low of 1.83% on February 24. Safe-haven currencies and gold have also staged furious rallies. Those of us who are investing on a thirty-year horizon can truly “look-through” the noise of politics and pandemics. If you may need cash sooner, it pays to stay alert.

And now for something completely different. One of the few endeavors with a greater error rate than economic forecasting is political forecasting. For this reason, it’s usually good practice for investors to ignore the political weather to the greatest extent possible. But we in the United States are facing an election of such potential societal and economic consequence, it’s simply impossible to divorce the financial market outlook from shifts in the political polls. Whatever happens, investors need a game plan.

Returning to our argument about the difficulty of prognostication, let’s look at shifts in the betting odds for the winner of the Democratic presidential primary over the last 5 months, courtesy of RealClearPolitics.com. As observers of the upset victories of Trump and Brexit in 2016 know, betting markets generally offer more accurate predictions than do pollsters. And yet the swings in the odds have been so vertiginous it would take a seasoned derivatives trader to keep up. A few months ago, Elizabeth Warren was the clear favorite; then it was Joe Biden; now, approaching Super Tuesday, it is Bernie Sanders. 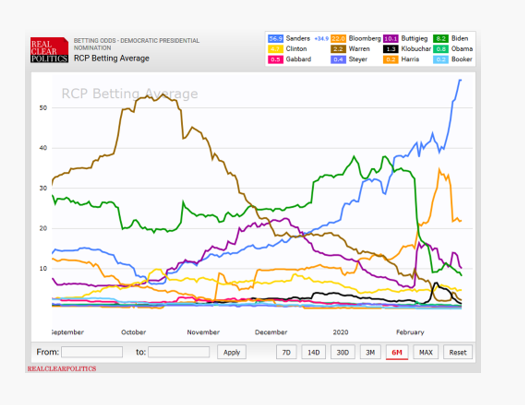 Investors are right to be nervous. However improbable many of Bernie’s policy proposals sound, he has a demonstrable ability to motivate and turn out a rabid and loyal following, much like his would-be general election opponent. It’s not irrational to assume that, should a self-declared “socialist” occupy 1600 Pennsylvania, there will be a large and passionate faction in favor of steeply higher corporate tax rates and nationalizing such industries as health insurance (and banking?) at the center of political power in the United States. This has not happened since the 1930’s. How should investors in stocks and corporate bonds react?

A cluster of year-end letters and 2020 forecasts we have read urged equanimity. At year-end, the apparent hazard was the roughly even odds of a Sanders or Warren nomination. However, these writers went on to reassure us, in order for either hard left candidate to achieve a meaningful shift in policy, Democrats would also have to overturn the Republican majority in the Senate, a chance most put at less than 20%. So, the joint probability of a far-left presidential win and a Democratic sweep of Congress was less than 10% (.5 times .2). A risk of note, to be sure, but nothing to worry about.

Except, as we learned in math class, we cannot naively multiply probabilities of events that are not independent. In other words, when events are correlated, such as the chance of rain on successive days, their combined probability is higher than if they were truly independent, like consecutive flips of a coin. If one in four Americans has heart disease, what are the chances both and you and your father both suffer from cardiac problems? It is higher than 1/16.

The tricky part, of course, is estimating correlations. Should Bernie Sanders prevail on November 3, the chances of a Democratic rout in the Senate elections may be higher than our unconditional estimate. But we have little ability to quantify this correlation, and correlations are known to shift dramatically as events unfold. This makes the whole enterprise of political handicapping subject to enormous error. In the language of chaos theory, events are “path dependent”. Small changes today have potentially enormous downstream implications next year. We just don’t know which small changes and which implications. Maybe Bernie is such a liability atop the ticket that the Democrats forfeit the house. Trivia question: what do Wesley Clark, Hillary Clinton, and Jeb Bush have in common? Answer: all were comfortably leading the primary polls on January 1, 2004, 2008, and 2016 respectively. We remember how that turned out.

We field a lot of questions from our clients about the outcome of the 2020 presidential race. Our answer: we don’t know. If we were good at calling political races, we’d probably be appearing as talking heads on cable news, not adjusting asset allocations. But given the heightened risk of a distinct upset to the asset market equilibrium that has prevailed over the past several years, we are doubly conscious of the difficulty of prediction. When the outlook is less sure, skillful gamblers size their wagers down accordingly. For us that means a continued focus on real assets, cash-flowing businesses, as well as geographic and sector diversification.

To put the case for caution in context, consider that five stocks (Microsoft, Apple, Google, Amazon, and Facebook) have collectively added over $4 trillion in market capitalization since 2013, and now represent almost 18% of the S&P 500. These are amazing franchises with strong tailwinds behind them;  anyone who has significantly participated in these gains has had a very good seven years in the market. But with trade, pandemic, collectivization, tax, anti-trust action and many other unquantifiable risks in prospect, it may make sense to take a piece of these profits and reinvest into strategies that do not assume the next half decade will look much like the last one.

WMS Partners is proud to announce that the firm has been recognized by WealthManagement.com as a...

Over the past two years, the pandemic has caused distorted perceptions of time for many of us, as...