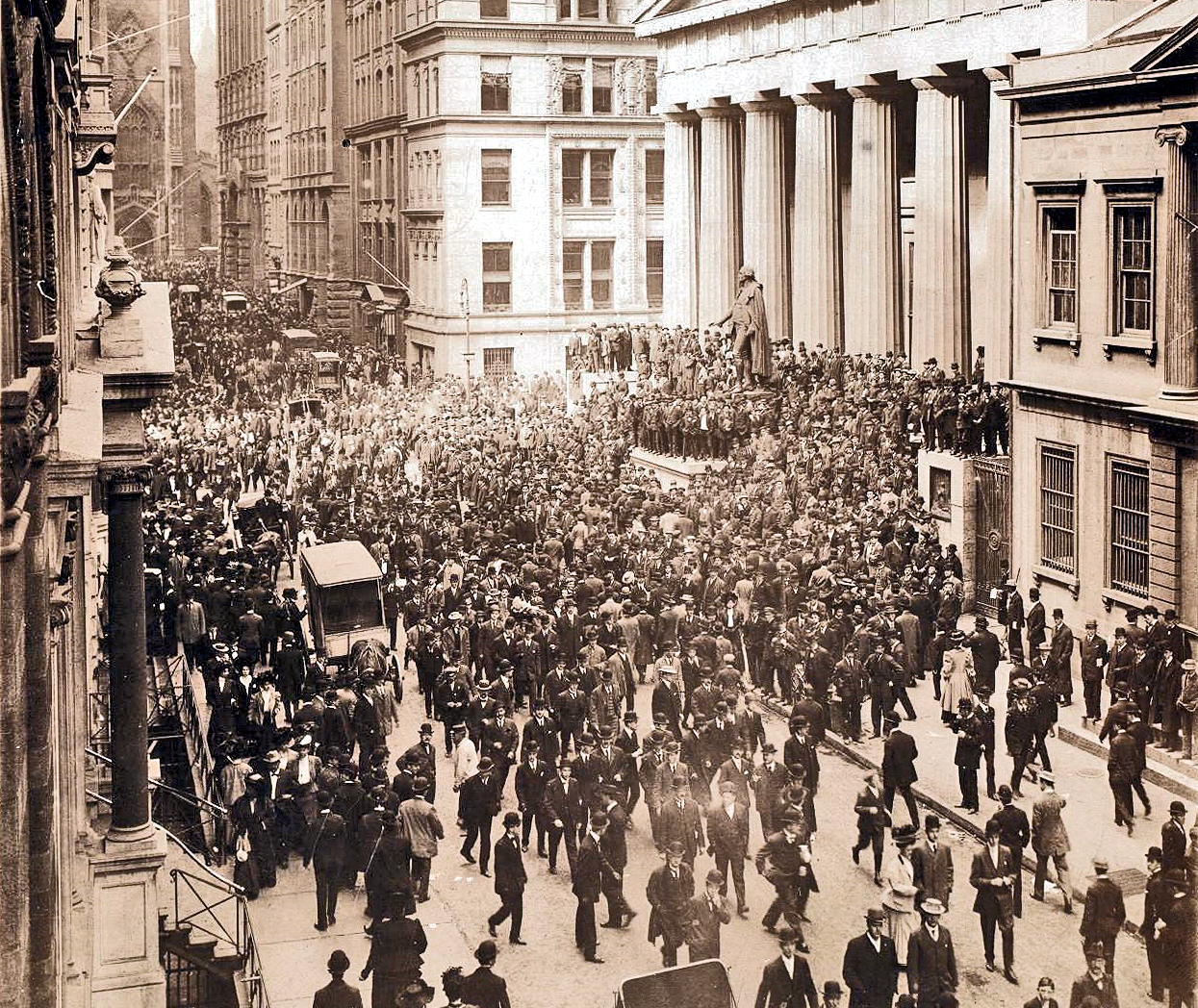 ... But Mind the Speculative Unwind and Position Cautiously

Volatile equity markets frequently accompany transitional periods in the economy. The approach of the COVID-19 pandemic’s second anniversary in the U.S. is certainly one. As we recently wrote, 2021 comprised an almost Goldilocks backdrop for stocks—rates stayed low, earnings blew away analysts’ estimates, and prodigious retail flows stoked corpulent valuations. Sentiment, however, has shifted sharply these first three weeks of 2022. As with any abrupt sell-off, the threads of causation are hard to unpick – the prospect of a hot war with Russia, concerns about the impact of Fed tightening on future growth, unceasing inflation finally taking a bite out of shoppers’ appetites—there are numerous factors that contribute to the sudden burst of worry that has propelled the VIX, or the “Fear Index” to levels not seen since the beginning of the pandemic. Time to step back and take stock. Bottom line, we continue to expect a 2022 characterized by economic growth in the U.S., though its pace may moderate. 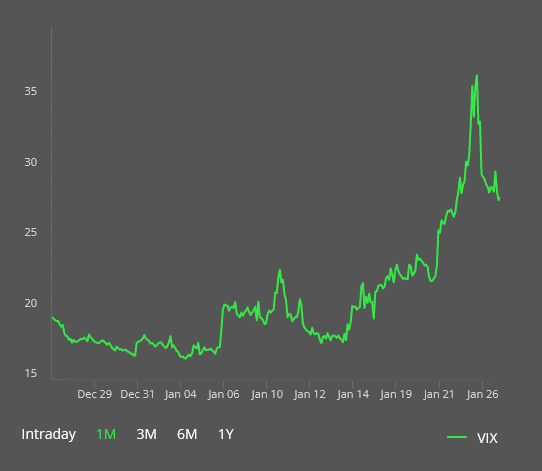 Investors are jittery but selling has not been indiscriminate. The selloff in equities has largely targeted the kinds of stocks that have done best for much of the last decade, and especially the last two years. The most speculative securities and market segments have been hit the hardest, as it is clear that the liquidity boom that fueled their rise is past its peak. On the positive side, credit spreads remain anchored, reflecting strong corporate balance sheets, a phenomenon which historically has coincided with no worse than modest drawdowns in the main equity indices.

Most recently, for example, the 2018 selloff saw a significant increase in high yield credit spreads (the white line), while the current dip has seen spreads remain extremely tight. In fact, they were higher just a few months ago. Likely this (thus far) benign credit picture reflects less angst about the real economy itself. The stock market action so far in 2022 is more consistent with some air coming out of the valuation balloon than with a new major threat to growth. Omicron and inflation and Russia will have negative repercussions for January and February’s data, but the medium-term picture is more favorable.

For a non-technical explanation of the recent turbulence, we can simply say that equities are experiencing a sharp and somewhat belated adjustment to a simultaneous move lower in growth expectations and a move higher in the path of interest rates.

For a somewhat more technical explanation, we focus on two things: real interest rates (rates that factor inflation in) and equity duration. Duration is a measurement of how long it takes, in years, for an investor to be repaid from an investment. Equity duration is the money-weighted average time when shareholders can expect to receive the cash flows from their investment in a company's stock. High-priced, low-yielding, and “growthy” technology stocks are discounting much far-off earnings growth, and thus possess the longest durations and the greatest sensitivity to moves in real interest rates.

Most recently, real 10-year yields have risen from negative 1.06% in December to negative 0.50% on January 20th as the stock market processed the surprising hawkish shift in the minutes released from the Fed’s last meeting. Stocks with the richest valuations and weak profits had in fact been downshifting throughout the back half of 2021. As an index of speculative fervor, Cathie Wood’s future tech-heavy ARK Innovation ETF has fallen 53% from its high last February. Meme stocks have been unwinding since the summer. But the selling of equity duration has broadened out. Viewed at any range, valuation compression and duration selling have been separating winners from losers. Cheaper countries are outperforming dearer ones (year-to-date, the emerging markets index are down only 1.14%). Cheaper indices are outperforming their more expensive cousins (the S&P 600 Small-Cap Value index has beaten the S&P 500 Growth Index by 9.46% through January 25th. Cryptocurrencies, once touted as a hedge of market risk, have acted as the purest expression of the price of future expectations versus current cashflow (Bitcoin is down 23% so far this year and 45% from its peak).

What has happened is that the discount rate used to relate future value back to the present is increasing significantly. And this, at least, appears to us as an overdue and indeed a healthy repricing of growth prospects. The global economy is still strong, the virus may be set to recede, and supply chains will unscramble. S&P earnings growth expectations are dimming, but when the dust settles on 2022, index earnings are likely to be 25 to 50 percent higher than their 2019 level. When the market finds its footing, it is quite likely it will be at levels that still represent impressive gains since the depths of pandemic.

What to expect about expectations?

But no longer can investors simply buy anything with a story—bankrupt movie theatres, electric vehicle-makers without so much as a working concept, parody coins, metaverse plays—and expect one-way traffic. U.S policymakers have a jumbo jet to land, and it came into 2022 still accelerating. Vladimir Putin senses discord among Western allies and strategic vulnerability (especially around the issue of energy prices) in central Europe. Since the days of Paul Volcker, the Federal Reserve has never hiked rates six or seven times, as is currently anticipated, without a recession following in short order. Investors’ risk hackles should be raised. These are extraordinary circumstances and while there was much to like about the fundamental backdrop for U.S. businesses, the biggest question mark has, since early last year, been valuation.

In the very short-term, market stress will resolve itself. Pullbacks are common; as Goldman Sachs points out, a 10% or greater pullback in the S&P happens, on average, every two years. VIX readings of 40 are not situations that typically persist for long, outside of financial crises. Big picture: The market has been due a correction. As we move from mid- to late-cycle, it is appropriate to take chips off the table and reallocate defensively. But let’s also be clear: growth is slowing, not slow. Consumer balance sheets are healthy and unemployment is low. The Fed’s change of tone with respect to inflation is welcome at last, and a flattening yield curve suggests the bond market believes in its inflation-fighting credentials. Further, Omicron numbers are coming down quickly, and the shift from pandemic to endemic implies tailwinds for reopening trades. Retail demand will normalize back toward services and supply chains will eventually unsnarl. Is it time to buy? Probably not yet, as valuation multiples have merely reset to late-2020 levels. Nevertheless, pullbacks that shake out weak hands and douse complacency tend to build a more sustainable base for long-term investment in the stock market.

Now is the time to focus on managing risk by reviewing what too many investors had apparently ignored: discipline and diversification. A properly diversified portfolio should perform well over reasonable time periods, even with the uncertainty of inflation and rising interest rates. Stay true to your long-term asset allocation targets and don’t neglect less popularly trafficked areas of the market. Invest new money away from crowded sectors to help balance out your portfolio. Regardless of the short-term direction of inflation, COVID-19 variants, geopolitical tensions or any further outside shock, managing risk through prudent portfolio management is crucial to reaching your goals.

A Video Conversation With Tim Chase

Tim talks about the impetus for WMS Partners and the firm's approach to investment advisory.

No. Decades of low inflation and falling real yields pushed up valuation multiples across all...