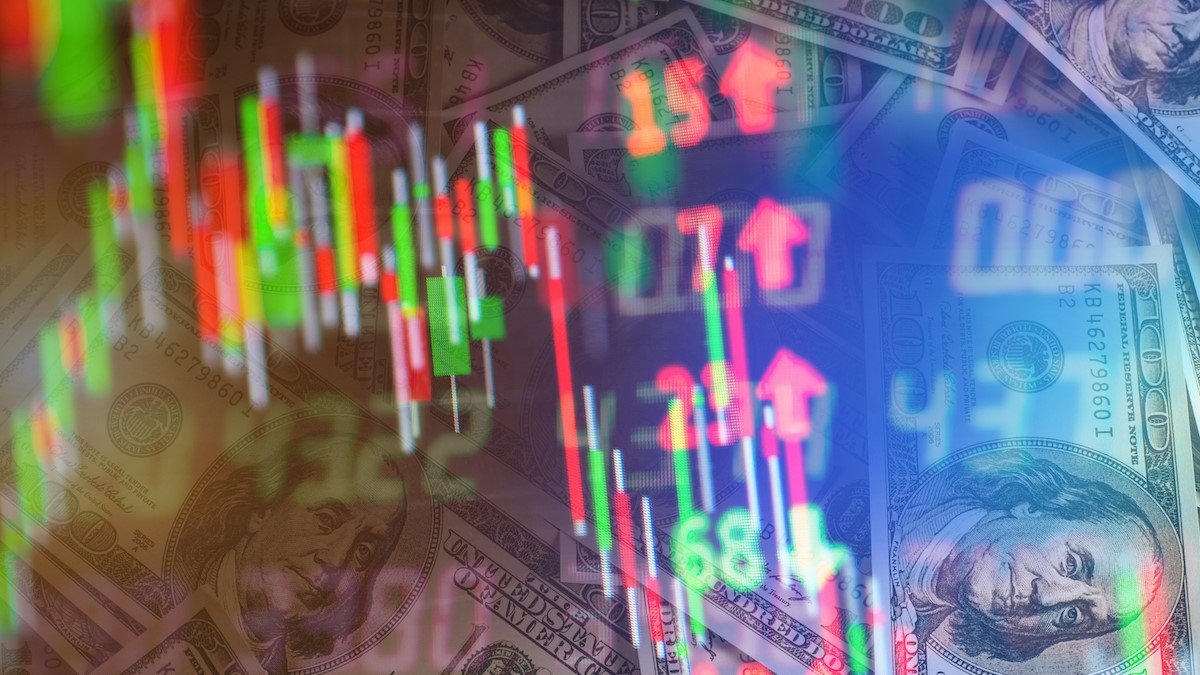 Stock prices do not go down forever, but that reality is little comfort while we’re still in the middle of a downward slide. After the historic bull market run of the last decade, U.S. capital markets are seeing a significant pullback this year. The particulars of the current risk-off environment are quite rare, though, with stocks and bonds falling in tandem, defying (recent) historical patterns. The primary drivers of these negative returns are common to both — higher than expected inflation, exacerbated by the war in Ukraine, and concern that central banks will raise rates aggressively to combat that high inflation, pushing the economy into a recession. Generally speaking, all major asset classes will struggle in that environment, especially after several years of high returns that saw valuations entering 2022 at levels prompted some to point out an “everything bubble.” We knew the capital markets could not go up at the rate that they had in perpetuity, but mark-to-market losses in many asset classes have occurred much faster than predicted. On the bright side, as we sit here today, the market is closer to a level at where we might espy real value.

So, what has happened? The Fed has meaningfully stepped up its inflation fight this year, with both rate hikes and guidance for a continued aggressive posture for the year ahead. Despite the risks of pushing the economy into a recession, the reasons for the Fed’s rate hikes are clear: job creation and consumer spending have remained strong, but inflation is running hot, eroding the purchasing power of incomes. As it tightens monetary policy, the Fed wants to loosen the labor market without causing it to break . In essence, the Fed wants to see job openings come down without a simultaneous major pickup in layoffs. The Fed clearly sees more risk coming from higher inflation than it does from a potential recession. And that’s a stance that makes sense to us. Aggressive policy rate hikes are likely still warranted, because although the economy has slowed, it is still holding up relatively well, which includes adding over 380,000 jobs per month over the past 6 months.

The interest rate increases so far are biting less than many investors expected, because the economy’s neutral policy rate is much higher than the Fed and most investors had believed. The neutral policy rate is that which is consistent with output at its potential growth rate and stable inflation at the central bank target, or the point where rates are neither stimulating nor restricting economic growth. Let’s look at the most recent Fed dot plot for a view into what the monetary policymakers may be thinking. 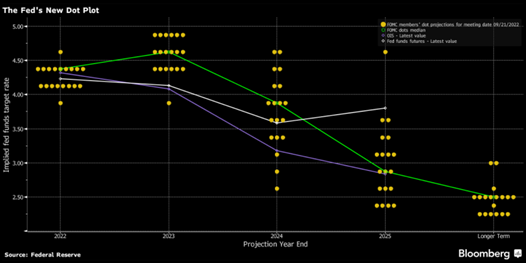 The Fed’s dot plot is a chart that records each FOMC member’s projection for the central bank’s key short-term interest rate. The dots reflect what each U.S. central banker thinks will be the appropriate midpoint of the Fed Funds rate at the end of each calendar year three years into the future, should the economy evolve as they expect. Officials also provide a dot for the longer run, which represents the neutral rate of interest. Each dot represents one committee member, though whose dot is whose remains a secret.

What we can see here is that the Fed plans to keep hiking rates for a while longer, and then likely pause to see if its actions manage to bring inflation down. But the sheer range of realistic possibilities expressed by the dot plot leads to an extraordinary scope of scenarios investors must consider. By the end of 2024, the Fed expects rates to be somewhere between 2.5% and 4.5%. That is quite the dispersion! And only one rate path is predicted by more than three individuals. There is only a slightly greater approach to consensus in the dot plots for 2025, with one outlier believing short-term rates could still be as high as 4.5%, while the rest of the committee foresees a glide back toward a long-term rate of about 2.5%.

How can we devise an investment strategy for an environment where the Fed funds rate could stay close to 5% for the next three years OR could very steadily ease over that same time period? Any strategy that allows investors to sleep at night should likely prepare for structurally higher inflation and interest rates, but leave flexibility to add to risk if markets can see the whites in inflation’s eyes. There is a natural lag in which monetary policy works into the economy, so it is quite possible that by the time the Fed is confident that inflation is heading for 2%, they will probably have done more than enough tightening. Given a possible desire to overcorrect for recent mistakes, they may err on the side of being more hawkish than less. And that differs significantly from the Fed that we have seen over the past two decades. A generational flood of liquidity has evaporated. Whatever the future holds, it will likely include drier financial conditions. We must therefore adjust our portfolios to withstand consistently higher interest rates and not expect that central banks to come to the rescue.

For investors, the main takeaway is that economic conditions are progressively becoming riskier on a cyclical basis. Several recently popular themes in particular are taking it on the chin, with gold prices likely to drop sharply if current support levels do not hold. Meanwhile, meme stocks, select profitless tech shares and crypto-currencies continue to sink. Normalizing bond yields and monetary conditions were always going to be financially painful. In a note that we published in May we suggested that this new environment would best be survived by shortening duration in both equity and fixed income investments, focusing on cash flows that are front-end loaded. We agree with this proposition, and formulate today's strategies with this concept in mind.

The growth style of equity investment has outperformed value so much over the past decade that it has come to dominate portfolios, even unintentionally. Growth managers and growth-skewed benchmark index ETFs (like the S&P 500) are now at much more risk than their value counterparts. Value typically outperforms in bear markets and over the full cycle of recession–recovery when preceded by the kind of wide value–growth valuation dispersion that we have seen building this past decade.

Within our Capital Appreciation strategies, we have used this year’s volatility to realize capital losses and replace some of the winners from the past decade with strategies that we believe will perform better in this new environment. Specifically, we have married some of our active managers, in whom we have the most conviction, with some factor-based passive strategies that implement at a low cost, exposures to equities we expect to be more resilient to a less accommodative monetary policy backdrop.

Factor-based investing uses predetermined risk factors to predict the success of a stock. There are five widely embraced investment style factors: size, value, quality, momentum, and volatility. Historically, the value, quality, and small-cap factors all tend to perform well during bear markets and recessions as well as the initial recoveries thereafter. Value (low price-to-earnings multiple), size (lower market cap) and momentum (strong recent performance) are pretty readily understood. Academic research, however, has further refined how simple, easy-to-implement measures can capture the underlying risk premia for value and size, and we have incorporated some of these subtleties in our factor portfolios. Low volatility is a less commonly understood driver of investment performance; low volatility stocks are simply those with less variable prices. That said, they are not associated with lower returns, meaning that on a risk-adjusted basis they offer a return advantage. Quality refers to high profitability and low (or conservative) leverage. The companies included in quality strategies tend to be more profitable and conservatively run. Historically, recessionary periods can create opportunities for factor investors. In the bear markets and the recoveries that follow the recessions, value, quality, and small-cap strategies tend to perform quite well.

In our Wealth Preservation strategies, we have used the reset in yields to re-emphasize an area of our portfolios that has been dormant for several years. We believe short duration fixed income generally offers an attractive risk-adjusted opportunity as we revisit the bond and cash strategies in this new dynamic rate environment. Short duration strategies have two attractive attributes today, offering potentially lower volatility than longer duration bonds while preserving most of the yield. Moreover, short duration strategies offer the potential of higher yields compared to money market securities, in addition to greater diversification. Their inherent liquidity further allows investors to place (new) bets on stocks should valuations overshoot on the downside. Light-footed, tactical positioning around central bank moves and a sharp focus on what is priced in versus our own view of the future should drive outperformance.

We at WMS have historically focused on the relative attractiveness of private investments, which provide premiums over their public market counterparts. The wide dispersion among strategies means that the manager selection process remains paramount. With the inflation surge, inflation-sensitive real assets play an increasingly key role in a diversified portfolio. Private markets are not immune, of course, to the ravages of higher interest rates. Much of the private equity industry, as we have written, has been built on cheap debt. Yet a savvy investor is able to find in private markets many opportunities whose returns are fundamentally less correlated to interest rates, and whose prospects are somewhat insulated from the swings in valuation multiples across global stocks. Select private investments complement lower duration portfolios of equities and bonds, potentially enhancing both diversification and return.

The Dog that Caught the Car

Last year we visited the topic of inflation, and wondered if, after a decade of false alarms, the...

Like all of you, the most we can do is watch in horror and sympathy at what is unfolding in Ukraine...