Why Do We Invest? 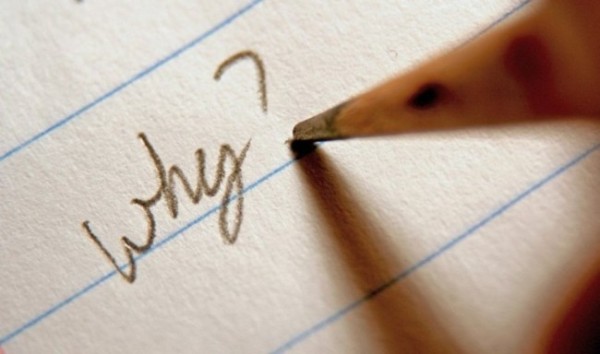 Why do we invest?

Many pundits and investors have been calling for a pullback in the stock market over the past year or so.  After all, the S&P 500 was up over 200% from its post-crisis low in March 2009, and has experienced consecutive double-digits returns the past few years.  “It can’t go up forever.”  The recent market volatility around the world (a decline of 15% from the top to bottom in the S&P 500 and nearly 40% in China) have given these folks what they were looking for—a  market in decline.  The question to answer now is: what do they do as a result?  The concept of a declining market and its prospects are far different than the reality of one; primarily because, when in theory, emotions are not interfering and thus the comprehension of investing fundamentals and their application can be seen clearly.

Investors talk about how much they would like to see the investments that they own decrease in price, allowing them to buy more at lower levels.  However, that action can be more difficult to execute during the actual decline. In fact, investors often feel more tempted to sell during these times to reduce their exposure to be more comfortable.  However, selling to be more comfortable (just like buying for that reason in a rising market) ignores the fundamentals of investing, the relationship between price and value.

So, we feel as though this is an apt time to remind ourselves about why we invest.  One of the brightest investors of all time, Robert (Tad) Jeffrey, wrote that “unless you are in a liquidating mode, what really matters is the growth in the earnings and dividends, not the market value, of your portfolio.” Real investing then is simply identifying a growing stream of earnings and dividends or, in real estate, cash flow, and climbing aboard and riding.

Chart 1 shows the growing earnings stream of the S&P 500 for the past two decades. It does not go up every year and, in some periods, such as 2007-2008 (driven by the once in a lifetime near collapse of the banking system), it dips more than usual.  Over time, however, it has moved up about 6% per year. That plus a dividend yield of about 2% has given a total return of about 8%. That 8% return was almost twice the 4.4% return achieved by bonds over the same period of time. 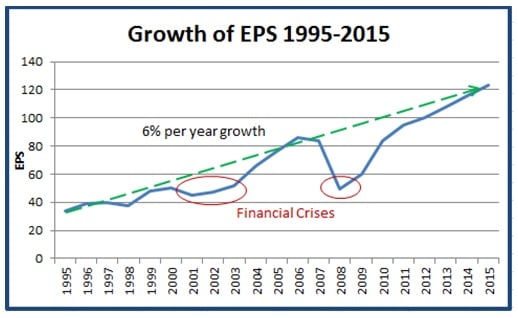 So what makes this seem so hard?

Well as we already mentioned, emotions can be a great deterrence for investors.  Fear can make it difficult to hold on to investments during downdrafts, just like greed can be difficult to restrain when everyone is buying a market that is increasing.  Another emotion that often influences investors is confidence.  Just like other emotions, confidence can swing radically.  It is just as important that investors remain moderate as to confidence as they do to other emotions.  Most investors are not willing to admit that they know far less than they thought about the economy, geopolitics and a host of other topics.  Howard Marks, of Oaktree Capital, succinctly outlines how everyone is buffeted by the same influences and emotions, saying, “superior investors may not be insulated, but they manage to act as if they are.”

In this case, when China slowed, its currency depreciated, and its market corrected, many investors realized that they don’t really know what that means for the economy and the rest of the world.  Most investors have limited insight, and choose to interpret that the market “knows” something and that is the reason behind the fall.  In reality though, the market’s drop is because of panic by the crowd related to negative news: Chinese investors bought stocks on margin and perhaps experienced their first serious correction, after a mini-bubble, and their selling prompted investors around the world to do the same because of implications that were derived from the market’s decline itself. The fundamentals of investing and valuation should determine behavior, not the actions of others.

Chart 2 shows that during the 1990s “irrational exuberance” carried price-earnings multiples too high (20x in 1990 and up to 30x in 1999), making it hard to make money.  In addition to those messy times such as 2008-2009 when EPS declined because of the near collapse of the banking system, there is the unfortunate fact that from time to time investors overpay for the stream of cash flow. 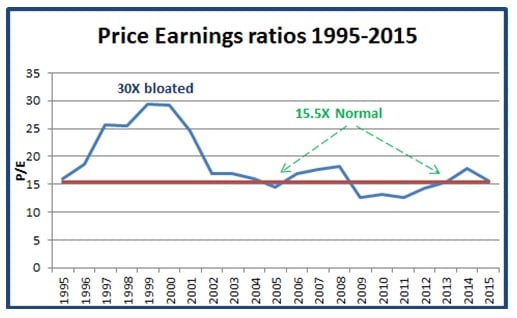 Between the two, the market has seemed like a roller coaster (Chart 3). 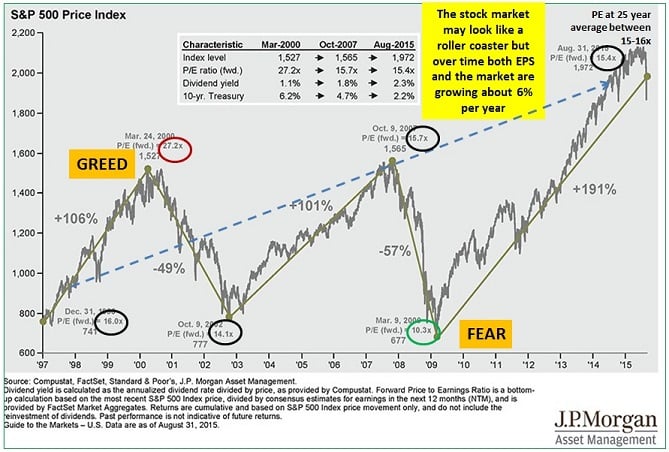 Oftentimes, the best thing to do is hold what you already have.  First, be sure that you understand why you own which securities and in what proportions, but then just put on your seatbelt and ride it out.  Restraining your emotions to “do something,” and sticking with what you own for sound reasons will be enough – though it may not be easy during times like these.

Fortunately, the current earnings growth outlook, while not perhaps as good as the 6% for the past twenty years, should be about 4% per year.  With the current level of 1,925 on the S&P 500 and the estimated EPS of $128, the price-earnings multiple of 15x is right on the long-term average, suggesting a return of 4% plus the dividend of 2%, or a total of 6%.  When compared to expected bond returns of 2-3%, equities are offering about twice the return.

Quality seems underappreciated and it seems possible to find companies that can grow faster than 4% per year with higher dividend yields than 2% and are selling at no significant premium to the market.

The U S economy is doing quite well, Europe is recovering, and China/Asia, while slowing, is still growing about twice as fast as the U.S.  Lower interest rates have allowed individuals and corporations to refinance so the debt burden is the lowest in modern times.  Lower gas prices may hurt the energy sector but they benefit the consumer and energy-importing countries far more than they hurt producers.  On top of all of that, the normal seasonally-difficult time from May through October is about over.

Remember that, over time, stocks do better than bonds and bonds do better than cash. They do better precisely because they are more volatile. Volatility is not risk. It is the oxygen that allows for the greater returns.  Investors are rewarded for taking what is perceived to be more risk.

There are some real risks:

This is easy to say and hard to do! Each year, on average, the stock market declines 14% from its yearly high and each time it is equally scary. We were down 14% on the Dow on August 25 and are now down 11% from this year’s high.  While it is very tempting to make your move when markets are weak and you read nothing but doom and gloom in the press, it is important to make an effort to resist the temptation and to stick with your long-term financial plan.

We believe that regularly reviewing your plan and knowing what sorts of options are available to you will help us come up with necessary changes, when needed, to ensure that your goals are always realized.

In the meantime, as always, please do not hesitate to contact us should you have any questions or concerns.