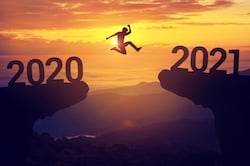 “The future course of events is always uncertain (although today’s risks do seem more dangerous than usual), and forecasting is notoriously difficult. Often, it is not the risks we can identify but the threats that cannot be anticipated that hold the greatest peril for investors and for society.”

With 2020 thankfully behind us and a new year now beginning, our inboxes increasingly fill up with capital market and economic forecasts. Everyone is obsessed with predictions, particularly at this time of year, always trying to infer what will happen and when. For those who get it right, they tout how smart they are; and for those who are wrong, they keep quiet, hoping they will be right next time. At WMS, writing about the futility of all this is an annual tradition. In fact, in our blog from the beginning of this past year titled, The Hazards of Forecasting (wms-partners.com/insights/market-update-february-24-2020), we contemplated this exact phenomenon at the commencement of the COVID-19 crisis here in the United States. As we said then, “these outlooks, forecasts, and projections are usually obsolete by the time the ink is dry.”

So turning the page on 2020, a year that felt like a series of rolling disasters, the capital markets closed the year pretty much where they began: stocks in a bull market, notching fresh all-time highs. That might have been considered foreseeable if it wasn’t for all the historic events that occurred in the middle, specifically the worst global pandemic in a century and the almost shockingly brief bear market that followed. We saw an unprecedented global shutdown and a clash between the virus’ economic fallout and aggressive reflationary efforts by global monetary authorities. Policymakers were able to quickly halt the incipient financial crisis but have been forced to resort to extreme monetary distortions and massive debt financing, particularly in the developed world. The economic recovery is not yet self-sustaining, but the aggressive policy response has supported economic activity and has been positive for financial asset markets. One seemingly cruel aspect of 2020 and the market’s rebound is that it occurred as the overall economy languished. Nearly 5 million more Americans are unemployed now compared with February, and the end of the U.S. recession that began in February has not been officially determined by the National Bureau of Economic Research, the body tasked with tracking economic cycles. That’s not altogether unusual, however. Past bull markets, including the prior one that began in March 2009, kicked off while the U.S. economy still was in a recession.

any of the multitude of Calendar Year 2020 forecasts null and void.”

The S&P 500 surged 66% since its March low and finished the year up 16%. Even absent the pandemic, this year’s stock market defied the many forecasts and expectations. The S&P 500’s 16% return is greater than even what the most bullish strategists forecasted this time last year (they called for an increase of about 5%), and the index had an even better year than its historical average (about 10%). This despite a 34% drop from its February peak to the March 23rd low. None of us could have foreseen such drama and it immediately rendered any of the multitude of Calendar Year 2020 forecasts null and void. Worse, after the stock market plummeted in February and March, forecasters kept misreading the tea leaves. In April, a Bloomberg survey showed that forecasters predicted the S&P 500 wouldn’t rise at all for this calendar year. They claimed the market would actually fall about 11%. In a recent Barron’s survey on the outlook for 2021, a panel of ten market strategists and chief investment officers now expect the index on average to rise some 9% in 2021. They were wrong in December of 2019, and they were wrong again in April of 2020. Will they be right in 2021? How does that old saying go? Fool me once… 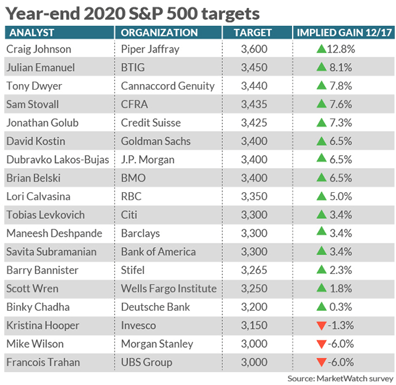 Investors can learn some valuable lessons from this past year by attempting to tune out (or at a minimum discount) the gyrating forecasts offered by market prognosticators. Most financial experts advise against panic-selling when the market starts to tumble, but it can be difficult to keep your composure during periods of volatility. After a huge sell-off, it is tempting to liquidate your investments before the market can fall any further. However, if you fled to cash when the market dropped, you missed the remarkable recovery that historically has occurred afterward. One stark statistic highlighting this risk focuses on the penalty an investor incurs by sitting out the biggest single-day gains. Without the best five, for instance, a tepid first half of 2020 becomes a horrendous one: a loss of 30%. 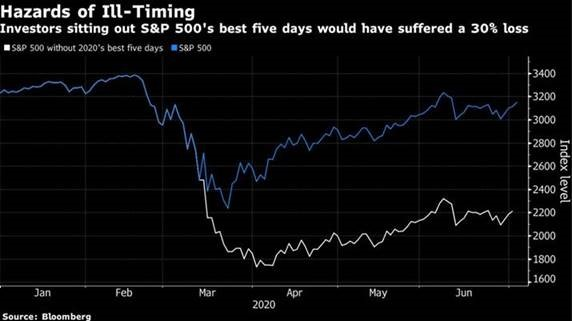 “A market forecast appears credible, causing us to factor it into decisions, but it is not rooted

in fact. Investment market forecasts are seldom a rational basis for an investment decision.”

One major issue that contributes to fraught decision-making is that our current society has access to more information than anyone can consume, and much of it is useless. If we hope to be successful at investing, we must pick and choose which information to spend our limited time and attention on. The first step is to understand the difference between what we can realistically know and what is truly unknowable. That way we can stop wasting valuable brain space on unknowable information. Once we recognize the difference between unknowable and knowable information, it’s surprising just how much can safely be ignored. The reason that unknowable information (such as concerns most financial forecasts) is better ignored is because it confuses our decision process. A market forecast appears credible, causing us to factor it into decisions, but it is not rooted in fact. Investment market forecasts are seldom a rational basis for an investment decision. Therefore, the best solution is to avoid unknowable information altogether, so that it doesn't muddle our thinking.

“Financial statistics can help us know the ten-year expectation for stocks based on historical performance,

but we should be equally clear that we don't know what stocks will ACTUALLY do in the next ten years.”

Knowable financial information is factual, as opposed to conjecture. Market valuations, current economic statistics, firm fundamentals are examples of current facts that are knowable and can be quantified. In other words, we can't know the future because the future is unknowable. Financial statistics can help us know the ten-year expectation for stocks based on historical performance, but we should be equally clear that we don't know what stocks will ACTUALLY do in the next ten years. We may have an average and a range of possibilities given certain assumptions, but these do not allow us to accurately predict the future. Another type of knowable financial information is historical research showing how investment markets behaved under specific conditions in the past. The value of historical research is in how it provides a meaningful context to help interpret current facts. It converts facts that would otherwise be dry and empty into actionable investment guidelines. The problem is that the future may not look like the past. This may sound like a subtle distinction, but it's not – it's critical. Remember, we must clearly distinguish what's knowable and what's unknowable if we aim for investing success in an unknowable future. Knowable financial advice isn't based on someone's judgment, opinion, or interpretation – it's grounded in fact. This crucial distinction has the power to dramatically improve our investment process. Financial advice that insists on predicting the unknowable is not a sound basis for risking our savings. Point estimates of index levels in 12 months’ time are a clear example of such advice. 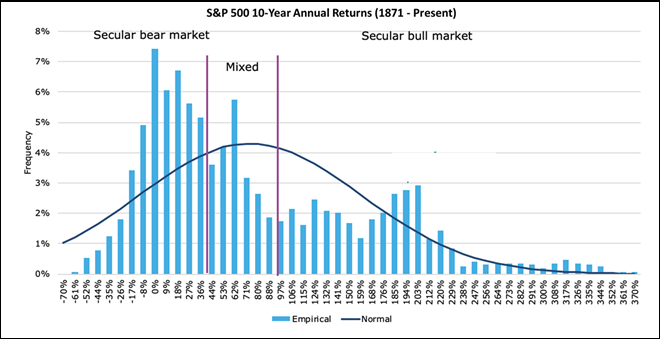 to each other to reduce volatility and risk in the overall portfolio, while still seeking market returns.”

At WMS, we structure our portfolios to help each of our client families meet all their financial goals and objectives over the long term. Our approach rests on a disciplined, strategic asset allocation for each investor that eliminates the inclination for individuals to overtrade or attempt market timing, thus maintaining an appropriate exposure at all times. The idea behind our approach is to allocate to several asset classes that are less correlated or negatively correlated to each other to reduce volatility and risk in the overall portfolio, while still seeking market returns. We implement this strategy allowing for flexibility in these allocations around those targets, and adjust them periodically as valuations and market trends change. No single mix of assets will remain optimal throughout time. Today’s below-normal economic growth rates, low inflation and historically low interest rates all imply different asset-class correlations than those of two decades ago, for example. Assets whose returns were negative in the past may very well turn positive as macroeconomic forces shift. Our approach does not look solely to one or two financial ratios, but analyzes an array of fundamental (knowable) information to identify mispriced assets in the context of a diversified portfolio. For many years, this has led us to employ alternative/private investments such as structured cash flows, private debt and real estate for income, and to use venture capital and private equity for equity market exposure.

The purpose of this commentary is not to dismiss entirely the genre of market forecasting. At WMS, we are voracious consumers of information and we consider these market forecasts and attempt to better understand the assumptions underlying them, including but not limited to the forecasters’ assumptions for interest rates, GDP, and equity earnings. However, in the final analysis, we understand that the future state of many of these variables is unknowable and our plans never depend on one or another estimate being “right”. As our Senior Strategist, Bob Killebrew, likes to say, “We don’t know what we don’t know.”  While we do our best to try to fill those gaps and learn as much as we can, humility in the face of radical uncertainty is the surest (and indeed only) recipe for long-term financial success.