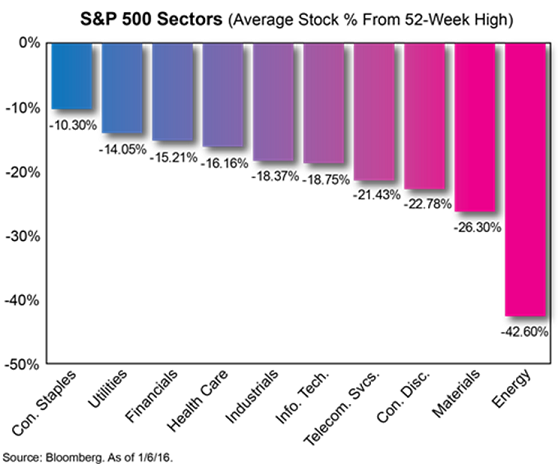 The news continues to be dominated by stories about the global economy and the sharp market declines we've seen since the start of the New Year.

While our investment team expects more volatility in 2016, we don't see the markets spiraling out of control like they did in 2008-2009.  We continue to watch portfolios very closely and will make adjustments accordingly if needed.  Please feel free to contact your advisor with any concerns.

Please see the below excerpt from an article by Bob Veres for some perspective into the current situation.

Wow!  There’s no diplomatic way to say this: the global stock markets are in panic mode right now.  In two weeks of trading, the U.S. S&P 500 index is down 8% on the year, which brings us close to correction territory (a 10% decline), and has some predicting a bear market (a 20% decline).

On top of that, we’ve been hearing a widely-publicized, rather alarming prediction from Royal Bank of Scotland analyst Andrew Roberts, saying that the global markets “look similar to 2008.”  Mr. Roberts is also predicting that technology and automation are set to wipe out half of all jobs in the developed world.  If you listen closely out the window, you can almost hear traders shouting “Sell!  Head for the exits!”

When you’re in the middle of so much panic, when people are stampeding in all directions, it’s hard to realize that there is no actual fire in the theater.  Yes, oil prices are down around $30 a barrel, and could go lower, which is not exactly terrific news for oil companies and oil services concerns—particularly those who have invested in fracking production.  But cheaper energy IS good news for manufacturers and consumers, which is sometimes forgotten in the gloomy forecasts.  Chinese stocks and the Chinese economy are showing more signs of weakness, and there are legitimate concerns about the status of junk bonds—that is, high-yield bonds issued by riskier companies with high debt levels, and many developing nations.  These bonds have stabilized in the past few weeks, but another Fed rate hike could destabilize them all over again, leading to forced selling and investors taking losses in the dicier corners of the bond market.

If you can think above the shouting and jostling toward the exits, you might take a moment to wonder about some of these panic triggers.  Are oil prices going to continue going down forever, or are they near a logical bottom?  Is this a time to be selling stocks, or, with prices this low, a better time to be buying?

And what about the RBS analyst who is yelling “Fire!” in the crowded theater?  A closer look at Mr. Roberts’ track record shows that he has been predicting disaster, with some regularity, for the past six years—rather incorrectly, as it turns out.  In June 2010, when the markets were about to embark on a remarkable five year boom, he wrote that “We cannot stress enough how strongly we believe that a cliff-edge may be around the corner, for the global banking system (particularly in Europe) and for the global economy.  Think the unthinkable,” he added, ominously.    (“The unthinkable,” whatever that meant, never happened.)

Again, in July 2012, his analyst report read, in part: “People talk about recovery, but to me we are in a much worse shape than the Great Depression.”  Wow!  Wasn’t it scary to have lived through, well, a 3.2% economic growth rate in the U.S. the following year?  What Great Depression was he talking about?   Taking his advice in the past would have put you on the sidelines for some of the nicest gains in recent stock market history.  And it’s interesting to note that one thing Mr. Roberts did NOT predict was the 2008 market meltdown.

Stocks periodically go on sale because people panic and sell them at just about any price they can get in their rush to the exits, and we are clearly experiencing one of those periods now.  Whether this will be one of those 5-10% years or a 20% year, only time will tell.  But it’s worth noting that, in the past, every one of those drawdowns eventually ended with an even greater upturn and markets testing new record highs.

Many investors apparently believe this is going to be the first time in market history where that isn’t going to happen.  The rest of us can stay in our seats and decline to join the panic.