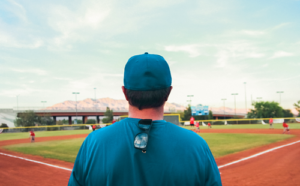 Now that the U.S. midterm election results have come in as expected, the question is whether the stock market pullback will become a Correction To Be Named Later.

By Bryan Lopez, Director of Research and Senior Portfolio Manager

While it is difficult to assert with 100% confidence, it is commonly believed that the English language contains more words than any other modern language. For example, according to Merriam-Webster, there are nearly 50 synonyms for the word “happy”. Whatever you think of the U.S. midterm election results—Democrats taking control of the House, Republicans holding the Senate—you may well be exultant, elated or just jolly that it’s now behind us. The stock market would seem to agree. On Wednesday, Nov. 7, the stock market opened with a triple-digit rise to the Dow, thanks to the election results coming in more or less as expected.

On top of the official words that may appear in the Oxford English Dictionary or Merriam-Webster, we have a tendency to make up new words or names for things all the time. The book “Sniglets (Snig’lit): Any Word That Doesn’t Appear in the Dictionary But Should”, by comedian Rich Hall, was published in 1984. Among several hundred new words in the book, Hall dubbed the little cloth-covered button at the top of a baseball cap a “squatcho”. This later morphed into “squatchee”, as in “Out of superstition, Boston Red Sox pitcher David Price would often remove the squatchee at the top of his hat prior to a game”.

Our fascination with naming things does not stop at obsolete hat fasteners (for the squatchee actually no longer serves any purpose in holding together the hat), but rather extends to naming different events and phenomena. Whether it’s a storm, a war, or a market correction, it seems that when an event has a name it’s not generally a positive thing. Of course, there was the Great Depression, but more recently we had the Dot-Com Bubble in the early part of the 21st century, and of course the Great Recession, a.k.a. the Financial Crisis, of 2008-09. However, there have also been more minor market pullbacks that have been graced with names. Remember the Taper Tantrum of 2013?

A Pullback, By Any Other Name

Market performance, both domestically and abroad, has been notably weak since the beginning of October, stoking fears that we may be in the middle of a Market Pullback To Be Named Later. However, to put things in perspective, the chart below illustrates that even some of the best market years since 1980 have featured significant intrayear declines, most of which were not given the notoriety of being named. The chart is as of October 31 and shows the S&P 500 up 1% for the year. The 10% decline coincidentally equates to both the decline that we witnessed in January-February of this year, as well as the one we experienced from October 3 to 29. Although it is still too early to ascertain whether the current decline is finished, it has been smaller in magnitude than the average intrayear decline (13.8%) from the past 38 years. 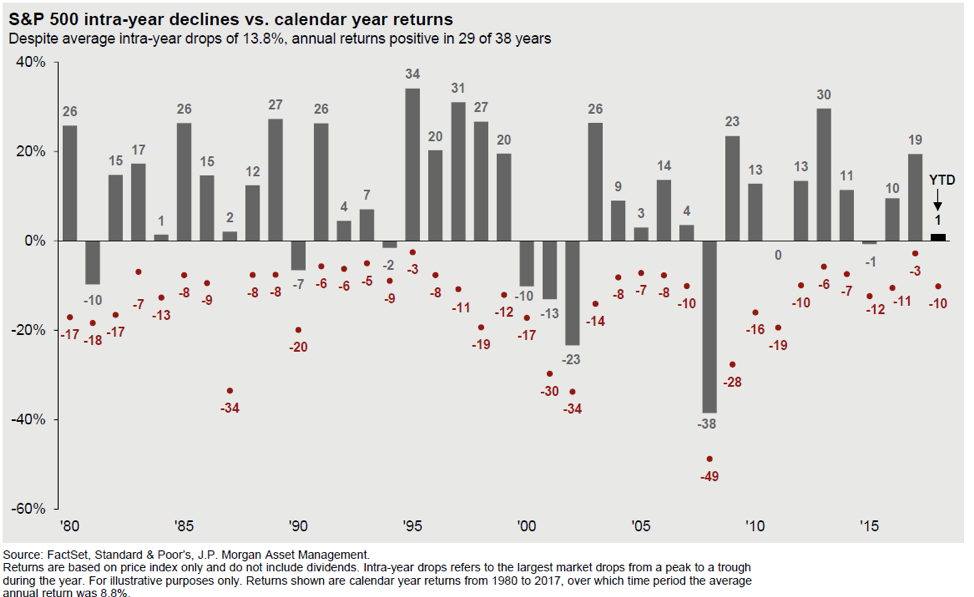 Whenever there is a market decline of the magnitude that we are experiencing now, the natural question that investors ask is “why is this happening?” Despite the clever names that are often bestowed upon these events, the answer is rarely as simple as assigning blame to just one factor. Currently, you could point at several factors including, but not limited to: rising interest rates, trade war concerns, decelerating global growth, and pre-election uncertainty.

However, the literal reason for why markets decline is that there are more willing sellers than willing buyers—the aforementioned reasons are potential risk factors that are stoking investors’ emotions. Interest rates ARE rising, trade war rhetoric IS concerning, global growth IS decelerating, and an election IS upon us. These things can all be true without materially affecting the relative attractiveness of global equity markets. The 10-year Treasury rate has risen to around 3.2%, but with real interest rates barely above zero at this point, it’s hard to make the argument that bonds are more attractive than equities (though the current yield environment does make cash and short-term Treasuries more attractive than corporate or longer-term sovereign debt, in our opinion). Global growth is decelerating, but decelerating is not the same as declining. Corporate earnings in aggregate are still very strong, both in the U.S. and internationally, and we are still favoring equities over fixed income for long-term investors. Furthermore, valuations in the U.S., which looked to be getting slightly frothy at the beginning of this year, are back below long-run averages. Valuations internationally, and in emerging markets in particular, are even more attractive.

Although we are not recommending increasing target allocations to equities at this time, we have been using this pullback as an opportunity to rebalance and increase exposures to innovation-related investments and emerging markets especially. In a few years when we look back at this time, we expect this period of volatility to be just another red dot on the chart above. But if you want to give it a name, just don’t call it a squatchee—that name’s already taken.

Learn how we help Ownership spanning three generations Meet our Team
A Legacy of Change No, Virginia, There Is No Santa Claus Rally This Year
© 2020 WMS Partners