Since the end of the financial crisis in 2009, U.S. equities have risen more than 300%.  This rise far outpaces international equities, which have increased by less than half that much. In the chart below, we can see the dominance of the S&P 500 index over the MSCI World Index ex-U.S., a common measure of international equity market performance. The relative strength of U.S. stocks is attributable to several factors: ultra-accommodative monetary policy, low interest rates, mild inflation, solid profit growth and a strong U.S. dollar. The Federal Reserve was a key factor in that equation, as it was extremely aggressive in easing financial conditions in the U.S. As a result, U.S. interest rates remained at near-zero levels for years. These record-low rates enticed U.S. investors to seek higher returns by moving a greater proportion of their asset allocation into risk assets such as stocks. International investors who invested in U.S. stocks also benefited from currency fluctuations, as a strong U.S. dollar was a boost to their returns when translated into local currency. 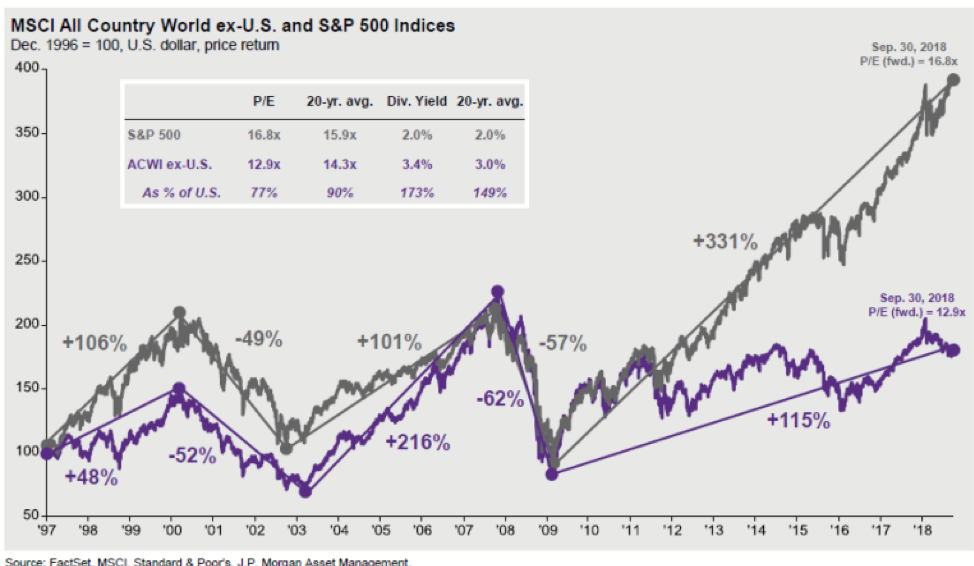 Although central banks in many developed countries also took steps to ease financial conditions following the crisis, several policy errors were made along the way. For instance, in 2011 the European Central Bank began to tighten monetary policy by increasing interest rates in an effort to combat above-target inflation, which caused the Eurozone to go into recession in 2012 for a second time. As a result, the U.S. stock market fell nearly 20%. Emerging markets have endured an even more challenging period. After the financial crisis, the bear market in oil—combined with fears that China's economy would slow down sharply—caused recessions in some emerging market countries. For U.S. investors, a strengthening U.S. dollar also detracted from international equity returns, which were reduced when converted back into U.S. dollars.

The calendar year thus far has been a microcosm of the performance discrepancy since the Great Recession. Global equities have diverged sharply this year, with the U.S. market roaring to new highs while most international markets have faltered since hitting cyclical peaks earlier this year. The breadth of U.S. outperformance reflects both macroeconomic and sector factors, although the former have dominated.

For now, the U.S. market retains several advantages. These advantages include superior domestic economic growth momentum, corporate earnings turbo-charged by this year’s tax cut, the appreciation of the U.S. dollar, and protectionist trade measures that will disproportionately hit non-U.S. corporate earnings. At the same time, U.S. relative outperformance has reached such an extreme that indicates much of the good news is already baked in. This has historically signaled a looming reversal.

It is important to note that we at the WMS Investment Committee are not suggesting that U.S. equities should be abandoned in favor of international. U.S. equities will always remain the core part of our capital appreciation strategies and we do not believe that anyone can favorably time changes in the market consistently. We believe that the inclusion of international equities in a diversified portfolio can help produce more efficient risk-adjusted returns.

When evaluating international stocks relative to U.S. stocks, the first issue for investors depends on a judgment about the risk that global economic conditions will deteriorate. Possible causes of that include overly tight U.S. monetary policy, a further rise in the U.S. dollar, and escalating trade tensions between the U.S. and select trading partners. U.S. tariffs on $200 billion of imports from China is a clear negative for global trade and international equities. While the Fed is gradually hiking interest rates, the dollar has appreciated and several emerging market economies are experiencing substantial strain. Overall global monetary policy and liquidity conditions remain generally supportive for risk assets and emerging market fundamentals are not consistent with a systemic crisis. There may be casualties as the Fed hikes, but U.S. rates remain low by any standard. The biggest threat to emerging markets would be a contraction in global trade, but we do not anticipate that in the year ahead.

Despite the risks discussed, we are maintaining a moderately constructive outlook for the global economy and believe that weakness in many non-U.S. equity markets is overdone. Moreover, several of the factors driving U.S. relative performance this year will fade by early 2019—most notably stimulus from the corporate tax cut. Against this backdrop, the risk-reward on a 6-12 month horizon favors a relative rebound in select non-U.S. markets, including emerging markets, the euro area and Japan.

We expect a corresponding phase of U.S. underperformance. A breakdown in non-U.S. equities—although not our expectation—would also represent a warning signal for U.S. stocks in absolute terms. That said, we stress that a reversal of recent relative performance trends rests on confirmation that global growth outside the U.S. will be steady-to-firmer in the year ahead and that global trade will continue to expand at least moderately. There are positive, but not yet definitive, such signs from Europe and Japan. Economic surprises have rebounded, and the slowdown in China remains modest and orderly so far. Global trade continues is growing at a healthy pace.

We favored U.S. stocks coming out of the financial crisis, and were underweight to international developed and emerging market equities during much of this period of their underperformance. Over the last several years, however, we have been reducing our underweight as fundamentals improve. We continuously consider factors such as economic activity, earnings growth, valuations and currency movement when assessing the relative attractiveness of domestic and international equity markets. We will maintain our posture toward U.S. and international equities, but we stand ready to tilt our equity weighting further away from the U.S. once we see additional evidence that international investments are poised to outperform.