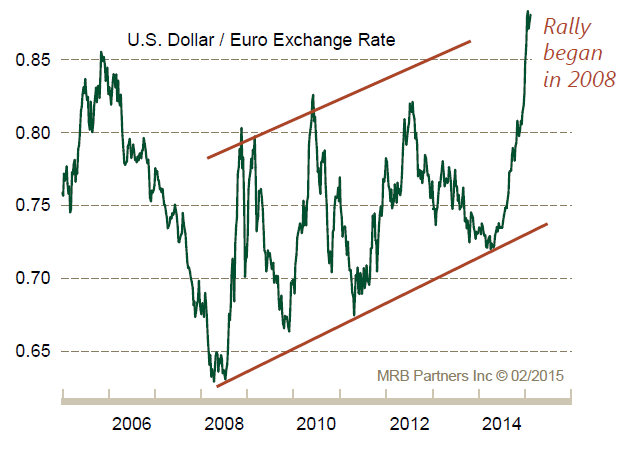 The rising value of the US dollar is giving millions of American consumers a much-deserved financial break.   That said, the dollar’s strength is a double-edged sword and it remains to be seen which edge is the sharper.  It makes US goods and services more expensive in comparison to the offerings of foreign competitors. It also has the effect of reducing the value of corporate profits from overseas operations. Parity between the dollar and euro is likely a matter of when it will happen and not a matter of whether it will happen. The details of the March, 2015,  European Central Bank (ECB) announcement of a quantitative easing program, combined with confirmation of a strong US economy has convinced a number of analysts to stick by their forecasts for euro-dollar to trade through to 1:1 by the end of the year.  Indeed, the declines are happening at such a pace that the target of parity could be achieved before year-end.

The strength and rapidity of the US dollar rally in recent months is impressive by historical standards and represents a profound shift in the global economy and capital markets. Yet the dollar has actually been in a bull market since mid-2011, having risen over 20% on a nominal trade-weighted basis (and more on a real trade-weighted basis). The current upcycle represents the third major strong-dollar period in the post-Bretton Woods era (this refers to the period of generally floating exchange rates against the US dollar that began following the end of the US dollar peg to gold in 1971 - the prior period was termed the Bretton Woods era).

The nation’s political stability, military superiority, geographic advantage and economic diversity have supported the dollar’s added muscle.  Many American consumers and investors are looking at this rare economic opportunity we’ve been handed, and wondering about ways they can take advantage of the strong US dollar.

The price of oil has fallen dramatically since topping out at $105 a barrel last June. The reduction is saving the nation about $2 billion a year, or most important to consumers, about $600 per family.  There are lots of reasons for the plummeting prices, not the least of which is increased supply, but another part of the equation is the global oil market is dominated by US dollars. So, just as the strong dollar buys more yen and euros, it also buys more oil, which drives the price of gas down even further for American consumers.

When the dollar is weak, many foreign goods are unaffordable for most Americans. Brands like Louis Vuitton, Hermes, Cartier and Prada seem untouchable.  But with a strong dollar, all of these imports become less expensive. Foreign manufacturers almost gain an unfair advantage in the American marketplace.

Here’s an illustration. In September, Subaru, normally a niche player in the vast American auto market, reported that it had its best-ever sales month (August 2014) in company history. Its year-over-year sales increase was 22 percent. Subaru has always made good cars, but when the company reports that it sold more Legacy, Forester, XV Crosstrek and Outback autos ever in August, you know more is in play than just product quality. That big tailwind driving sales forward is the strong US dollar. In contrast, domestics, like Ford and General Motors, don’t have the same competitive advantage as Subaru, Toyota, and other manufacturers. So, if you’ve been craving a Porsche or a pair of Gucci’s, now’s the time to put your power-dollars to work.

Europe and Asia are on sale for travel-happy Americans. Imagine getting 10 percent right off the top of everything you purchase, from German sauerbraten and Spanish tapas to trips down Venice’s Grand Canal.

A strong/rising dollar is also a net positive for the global economy and capital markets, by redistributing growth from the US and alleviating deflationary risks in the rest of the world. The dollar plays a crucial role in global investment strategy given its impact on relative growth, corporate profits, inflation, policy rates, commodity prices and capital flows. However, assessing its impact on investment returns and strategy is contingent on understanding what is driving the dollar; for the dollar is both a reflection of the expectations of economic agents, and a mechanism by which global growth and relative prices are rebalanced across countries and over time.

We believe that US economic growth should continue to outpace the rest of the developed world (and most of the Emerging Markets as well) by a significant margin. Indeed, an economic recovery in the rest of the world is likely contingent on stable-to-stronger US growth. That said, the relative growth gap between the US and the rest of the world is already wide, which should limit further upside for the dollar. Moreover, economic recovery is slowly developing in the euro area and Japan, which should eventually reduce the US growth advantage, albeit probably only later this year at best. As in past cycles, a stronger dollar should help stimulate economic recoveries in export-led economies (especially non-resource producers) and help sustain solid domestic demand growth in the US.

If the expected further appreciation of the dollar unfolds alongside an improvement of the global economy as we are suggesting, this would mark a contrast to the trend in recent decades when the dollar primarily behaved counter-cyclically, rising during periods of slowing economic growth and falling when growth was accelerating. The expected further appreciation of the dollar while global growth is improving underscores the unique character of the current cycle.

Perhaps most notably, we could see the global growth cycle gradually re-synchronize, with all of the major economies (US, euro area, China and Japan) expanding or accelerating simultaneously for the first time since 2009-2010. A more synchronized recovery would coincide with an upturn in global trade, thereby helping to further catalyze growth in export-driven countries and reinforcing the recovery process. The gains for non-US exporters could be augmented by the associated decline in their currencies (as the dollar rises).

Further upside for the dollar should also coincide with more accommodative global monetary conditions than have prevailed in past strong dollar cycles. The dollar bull markets in the early-1980s and late-1990s coincided with tightening global liquidity conditions, as cross-border bank lending decelerated. Non-US economies, particularly in the emerging world, suffered disproportionately, albeit to varying degrees depending on the stage of their economic cycle.

A healthier global economy would cause at least a partial unwinding of current deflation fears and global bond yields would then climb. A stronger dollar and recovering global growth would support a further advance in global equities prices, while catalyzing a gradual shift in market leadership from the US stocks to those of the rest of the world. Non-resource, export-driven markets in Europe and Asia will be the prime beneficiaries. A rising dollar will add to downside risks for commodity prices, although adverse supply conditions will remain the primary driver.

As the euro's value drops, the dollar-euro parity could affect your plans: whether you are investing in foreign markets or just planning a spring vacation in the south of France.   The magical state of parity is a significant marker not only because it reduces the cost of exchanging money—but also because it is a rare occurrence.   The last parity moment was in November 2002. Parity also occurred when the euro was introduced in 1999, and then again in 2000.   No one knows for sure, but it's likely that the moment of parity—the golden one-to-one ratio—will be brief. The overall currency trend of a stronger dollar and weaker euro, however, may be more long term.   If you should have any questions about this phenomenon, or anything else, we welcome a call, e-mail or meeting. Thanks, as always, for your trust and fidelity.